Home World On Dikanda, or How to arrange the East

On Dikanda, or How to arrange the East 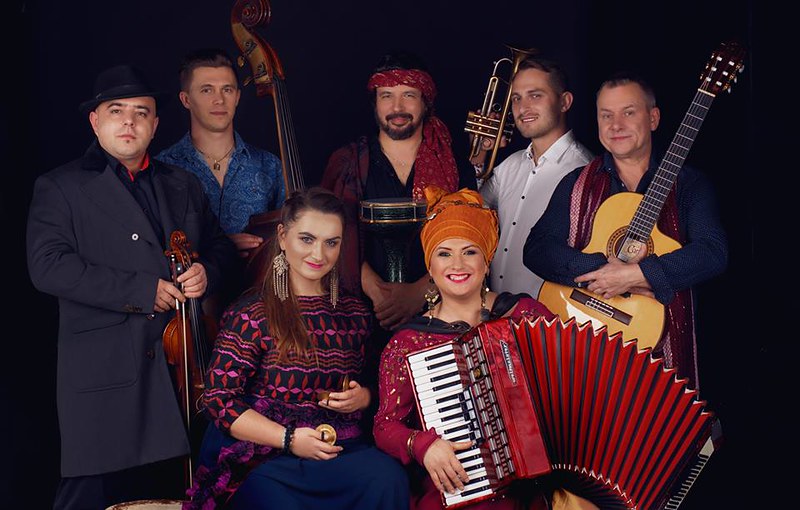 At the core of a wide-ranging musical project, the Dikanda’s “eastern” sound conjures symbolic spaces of unmatched immensity.

In Poland, interest in world music is quite alive, and has managed to foster a sizable array of oh-not-so-bad artists during the last twenty years: the Kroke group from Krakow, just to mention one example, is very successful in mixing Klezmer and Balkan flavours with a decent jazzy box of tricks. Varsovian singer Katarzyna Szczot, also known as Kayah, co-authored with Goran Bregović one of the bestselling albums in Poland (Polish: Kayah i Bregović, 1999; 700 thousand copies sold); later on, she has proven an excellent evangelist of the Ladin, Yiddish, Arabic, Hebrew, Macedonian, Roman, and Polish musical traditions (Transoriental Orchestra, 2013).

The Dikanda ensemble was founded in Szczecin in 1997. Its reference “space” is still the East, this time in an even more comprehensive meaning, as a semi-mythical place that extends well beyond the purely geographic scope and acquires a historical as well as an anthropological connotation. Perhaps this is an awkward choice for a band whose “breeding terrain” was one of the westernmost cities in the country, about a handful of miles from the German border and from the Baltic shores. Yet, it is only natural for people whose dwelling place is an outpost of Polish identity (and was once, in its turn, part of the former Ehemalige Deutsche Ostgebiete) to look eastward for the roots of their own identity, towards those territories (Polish: Kresy Wschodnie) that were given up to Ukraine and Belarus after World War II.

From neighbouring Slavic countries to the Balkans, to Russia, to Israel, to Africa and India, proceeding further and further was inevitable: just as it is natural, for anybody of Europe heritage wanting to explore the Eastern “space”, to embrace those “different” traditions that art music has always kept at a distance. Even when “real musicians” became addicted to folk music, regarding it as an never-ending reservoir of inspiration: one need only think of the nationalistic trends in post-Romantic music.

This spirit of near-scientific inventory of the musical material pervades the debut album of the ensemble, which goes by the tale-telling name of Music of the four parts of the East (Polish: Muzyka czterech stron wschodu) and also contains, as a good approximation to a foundational Manifesto, the eponymous piece of project. For Dikanda is nothing but the name of an extended familial structure of some populations from Mayombe and Congo, whose members all descend, according to their mother’s lineage, from a common ancestor 1. In this early stage, the ensemble includes only five artists: namely, Ania Witczak (voice and accordion), Katarzyna Dziubak (voice and violin), Piotr Rejdak (guitar), Grzegorz Kolbrecki (bass), and Daniel Kaczmarczyk (percussion).

Dikanda’s first journey to the four parts of the East ends with a Jewish Tune (Polish: Melodia żydowska), followed by a haunting Jiddisch Lied, Be quiet (Yiddish: Scha Still), and by a famous piece belonging to the Polish folk repertory, The moon shines (Polish: Świeci miesiąc): which is a tribute to the diversity and complexity of the sources whereby the Polish national identity is defined.

True to its program, over the years the ensemble has exhibited a remarkable fluidiy in its “anatomy”, since several new artists have joined the team (Violina Janiszewska, voice; Adam Dziewałtowski,
; Katarzyna Bogusz, voice; and others). Besides, more in-depth musicological research was started, that in turn implied the collaboration of specialists in national or traditional instruments, such as the duduk, a double reed woodwind instrument made of apricot wood, belonging to the Armenian tradition; or the zurna, a relative of the oboe, ubiquitous in Arab countries.

The second album, Jakhana Jakhana (2002), explores larger and larger landscapes: of prime importance is the inclusion of the popular Magyar tune Stars (Hungarian: Csillagok), a cornerstone of Hungarian musicology since it was collected by Béla Bartók in his Gyermekeknek2. In the following albums, the group manages to nail down a deeper competence, or rather a stronger calling, to reuse and re-elaborate traditional material, partly abandoning the “compilation” paradigm. Sometimes this implies tailoring novel lyrics to a traditional melody (this is the case of Staro nevestinsko in Ajotoro, 2008); sometimes, and more and more often so, both verses and music are made from scratch, like in Amijasa (Usztijo, 2004).

Since its inception, the ensemble has received prestigious awards both in Poland and abroad, and today their schedule is packed with concerts and events, especially in Germany, Austria, Switzerland, France, but also in Russia, India, and in the US. It is interesting to note that the group’s usual audience comes, for the greatest part, from the West. Hence, it is only natural to wonder how large is the risk that projects such as Dikanda’s are but an elaborate form of colonialism in disguise, a subtle attempt at cultural appropriation akin to what Edward Said used to call Orientalism. In addition, who can guarantee that popularizing something is different from distorting it or, at least, from providing a watered-down version, suitable for consumption by an audience that is utterly ignorant of the original production context? It is not entirely unworthy of attention the stance of those who believe that the forms and symbols of a culture cannot be defined unless within the same culture, and that, therefore, every time we apply a tool pertaining to another culture, be it “imperialist” or hegemonic, we introduce a deviation, or a bias, which is tantamount to a distortion of the original object. 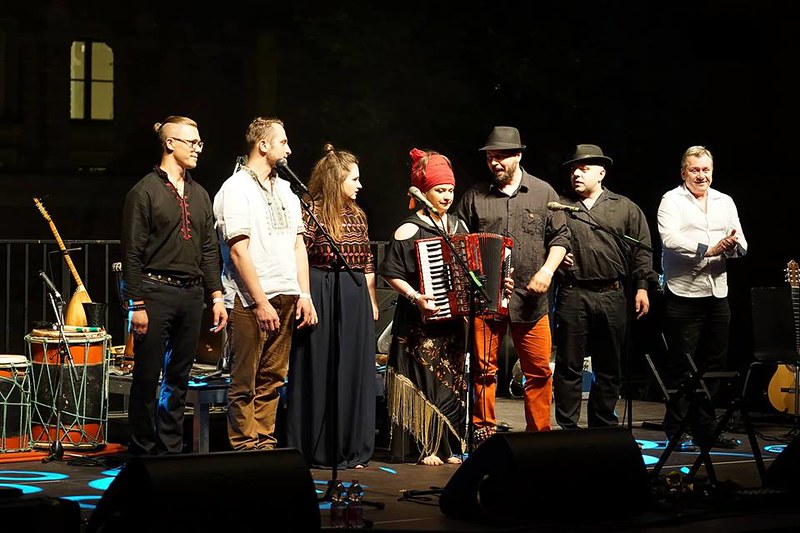 On the other hand, by following this route we are bound to end up embroiled in that form of solipsism for which there is no possibility of knowledge and of communication except for an almost autistic one: beginning and ending in ourselves. Whereas it is yet to be proven that a culture’s organized systems of signs and meanings are so alien to their “match” in another culture that the very operation of translating, of converting them, is unthinkable. From a more general standpoint, transcribing, recording, collecting does not necessarily involve a distortion. Sometimes, on the contrary, such an approach can just amount to caring for, to getting to know, and to laying the foundations for what is, ultimately, a discourse on mankind.

It is also essential to avoid the pitfall of assuming “other” cultures as ontologically given (rather than historically developed), and as such immune from any process of mutation; presuming perhaps that the preservation of “purity” is worthy of being pursued in each and every case, and at any cost. However, Dikanda’s purpose is neither mere popularization, nor a strictly scientific recording and preserving of Volksmusik heritage. On the contrary, those are but two poles within which their research activity develops, adjusting itself and finding its original balance in due course.

It appears to me rather unfruitful to draw comparisons with works such as Leoš Janáček’s, the Moravian composer and musicologist who explored the exceptional sophistication of folk music in his country by studying the prosody of the spoken Czech language. Not to speak of larger projects such as the Nuova Compagnia di Canto Popolare, the ensemble founded by Eugenio Bennato, Carlo D’Angiò, and Giovanni Mauriello in southern Italy, which remains unsurpassed in bringing to perfection the trade-off between philological exactness and artistic accomplishment, as far as the Neapolitan musical heritage of the XVII and XVIII centuries is concerned. In such cases, the field of research is quite narrowed-down in space and time. On the contrary, the Dikanda move in a space-time that belongs to the world of myths and symbols at least as much as it belongs to geography and history. Their mission is to explore the East through its one thousand and one incarnations, through its infinite nuances, and then to unfold its wonders to those at home, in a language that is universally intelligible. We can say that, perhaps, the spirit of the great Polish tradition in anthropology, of Bronisław Malinowski’s masterpieces, and of the reportage school best represented by Ryszard Kapuściński, is not out of the question here.

Thus, though partially traded off for a peculiar kind of stylistic cross-contamination, the philological scruple still holds its ground. Evidence to that effect is the ever-growing use of indigenous instruments, and the ensemble’s greater and greater “loyalty” to native languages: Polish, Ukrainian, Belarusian, Slovak, Russian, Serbian, Macedonian, Bulgarian, Hungarian, Armenian, Kurdish, Greek, Yiddish, Romani…

Speaking of Roma, Dikanda’s album Usztijo contains an arrangement of the famous Ederlezi, a song belonging to the Balkan Romani tradition, whose name derives from the Turkish name (Hıdırellez) of a pagan festival of spring, later on syncretized with the celebration of Saint George’s Day. Goran Bregović managed to slip the song into the unforgettable soundtrack of Emir Kusturica’s movie Time of the Gypsies (Serbian: Dom za vešanje) and in the Western imagination this melody will stay forever linked to the truly remarkable voice of Vaska Jankovska. However, Kusturica’s rendition has an emphatically “bohemian” character to it that is not entirely immune to the risk of an ill-timed Orientalism. On the other hand, the Dikanda’s arrangement somehow manages to free us from this “encrusting” of collective imagination, thus restoring vitality and truth to the timeless lyrics that express at the same time marginalization and identity:

A me, chorro, dural beshava

[All the Roma, dad, slaughter lambs

But me, poor, I am sitting apart

A Romani day, our day