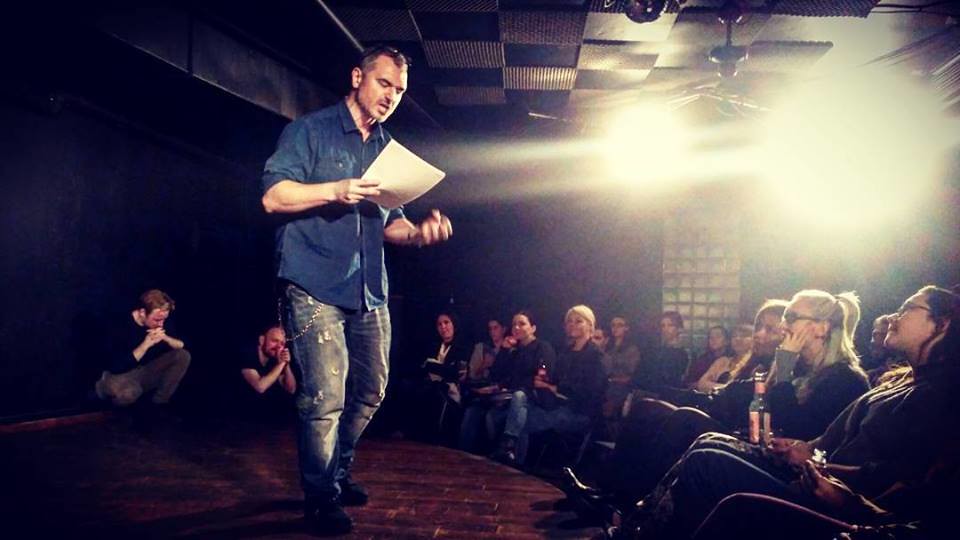 A conversation with the Polish-British translator, publisher, author, and cultural player Marek Kazmierski

You may stumble upon Marek Kazmierski on the Internet, sharing one of his articles for Culture.pl or watching him reading his English translations of Polish poets Julian Tuwim, Zuzanna Ginczanka, and Aleksander Fredro. Also, you may leaf through one of the beautifully bound books brought out by OFF_Press, the publishing house founded by Kazmierski, with a catalogue including authors such as Wioletta Greg and Irit Amiel.

If you live in Warsaw chances are that you will bump into Kazmierski in a café, at a cultural event or at a multilingual poetry slam on both banks of the Vistula river. You may even happen to see him taking the floor on one of the English theatre improv nights that are blossoming up in the heart of the Polish capital. On 10th January 2018, he was on the stage of Klub Komediowy, in Warsaw’s Saviour Square reading his English translations and renditions of songs by authors such as Poland’s national bard Adam Mickiewicz, songwriters Marek Grechuta, and Jan Pietrzak. The event was the third in a series called ‘Polish Legends in Translation: Tuwim & Co’ that sees Kazmierski cooperating with Michał Sufin founder of the famous Polish improv group Klancyk.

‘Niepewność’ (Uncertainty) is a poem written by Adam Mickiewicz and put into music by songwriter Marek Grechuta. Kazmierski read his own satyrical English rendition of the text on 10th January.

Marek, you left Poland for the UK in 1985 as a twelve years old. What do you remember of those early Polish days and how did the transition to the UK work for you?

“When I think about the world my father was born in and the one I came into, there seems so little comparison with the one we’re living in today. The country my family escaped in 1985 was part of a very different Europe. I remember my childhood as a time of incredible vividness, caused by the political struggle I was aware of, even at a young age, the tight human connections that arose from that, the hardships which made everything we had really precious. Moving to England, a land of peace and plenty, was liberating in many ways, but I was able to appreciate the pluses and minuses of both places. While we’ve seen a recent blossoming of Poland on the geopolitical maps of the globe, Britain has radically declined in this respect and I have no idea what its future is. I think the future of Polish culture and economy is also a puzzle, but nothing would change the fact that this place really feels like home”.

What brought you back home then and what keeps you in Warsaw?

“The Poland I left 33 years ago and the boy who left it are both completely different prospects right now, so it’s impossible to talk about any sort of return. But of course it is a revisiting of the source of who I am. I absolutely feel like a child of central Europe and its heritage and texture are a source of endless fascination for me. After 30 years of living in the Anglo-Saxon world, I have not become attached to it. It is too cool, too comfy for me. And, above all, I can’t stand being away from this city. Warsaw is something of an acquired taste, but I am head over heels in love with it. It filled with so many hidden secrets, so many charming scars and wild surprises that after two years of living here I am still thrilled by all it has to offer. Warsaw is the greenest capital in Europe and its people are visually fascinating. This city keeps changing, yet so many things about it – the shops, the customs, the cuisine – seem like an echo of a lost age”.

As a translator from Polish to English, do you see any willingness to translate the rich Polish cultural heritage into foreign languages to make it more known abroad?

“Some Polish creative genres export efficiently, such as classical music, jazz, dance, some films, visual arts. Literature is very much lagging behind, because no one really has addressed the problem of literary translations. One good example of this is the funding for the translations of some of the greatest books of children’s literature published in Poland, those written by Jan Brzechwa. In 2013, there was a substantial grant allotted by the European Union to translate some of those poems and novels for children. The translations were meant to appear in print in mid 2014,
but three and a half years later I still can’t get hold of them. This shows you how bad we are at nurturing our own cultural heritage”.

Today only about 3% of the books published in the UK are translations. Why that happens and do you think something is changing thanks to British publishing houses open to foreign authors such as your OFF_Press, Pushkin Press or – now dormant – Stork Press?

“The truth about OFF_Press, the same as Stork Press, is that they were mild experiments at nonprofit publishing and, as such, they were both designed and destined to fail. Pushkin Press is a different proposition, much more professional. As for that British figure of 3%, in the US they estimate only 1.7% of published poetry, prose, literary non-fiction are translations. In Poland, some 40% of all new books published every year are translations from other languages. However, 100,000 new books are published in the UK each year and 3% of that equals to 3,000 books in
translation, making almost 10 new books a day! And yet, there are ways of improving those odds. In 1983, translators of Swedish books into English set up a magazine of the most interesting samples of their work and sent it out to editors, publishers, agents all across the English language world. Today we see the fruits of those strategic efforts as everyone knows and enjoys Nordic crime fiction. I want to achieve the same thing with Polish poetry for children and stage song for adults. And then maybe I’ll have another shot at serious poetry”.

You’ve been translating Polish poets for the English speaking audience for years now. What do you enjoy the most of your work and what frustrates you as a translator?

“The hardest thing in translating poetry is knowing that only a handful of people will ever reach for and appreciate the fruits of this hard labour. This is why translating poetry for children and popular songs is so rewarding. It’s much harder than poetry, because of the complex sound elements, but knowing that it will reach a much bigger audience makes it so much easier to put in that extra effort. Translating poems for grown-ups is a little bit like eating a birthday cake all alone – a dubiously solitary ‘pleasure’. When I translate poems for kids or popular songs that all Polish people know and love, knowing how many readers will enjoy those translations, it’s like having a great huge birthday party with thousands of friends in attendance. Thanks to the Internet, I can be a lot more flexible and dynamic in distributing my translations”. 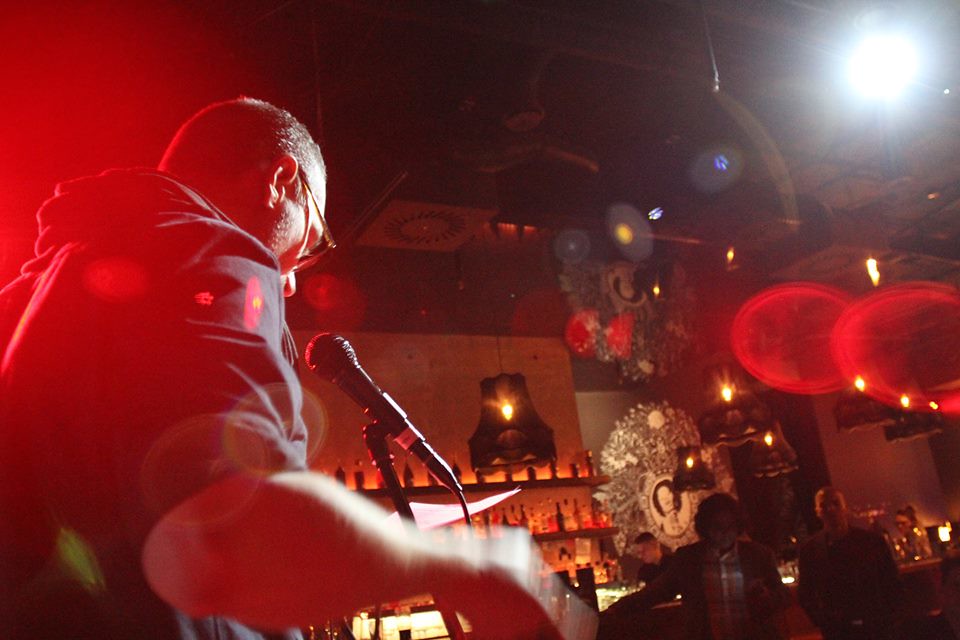 You say that ‘a handful of people’ read poetry. And yet, in Poland there are hundreds of poetry books and chapbooks published each year, poetry events, festivals and so on. Do you think Poles are more interested than others in contemporary poetry?

“This immense amount of activity is both a blessing and a curse. Poland produces hundreds of books of poems every year, but they have zero distribution. This means thousands of poems and millions of pages are all destined to go unread. This is insane. But Poland has a history where during times of oppression and even non-existence language, and especially poetry, was used to sustain its identity, its culture. This is why poetry for politics history is so vital. Very few people in Poland today read Norwid, Gałczyński or Herbert any more, but they were all great in their own
ways as keepers of the Polish cultural flame”.

You’re a translator, but also a publisher, an author, a teacher, a visual artist. Do you believe that a translator today should be more involved in cultural events and / or on social media, like you are, in order to reach out for a wider audience?

“I believe it is this diversity of activity which equips me to be a decent translator, because all the greatest writers were also equally diverse in their thinking and passions. The problem with most literary translations is that the translators themselves are far more restricted as creative forces then the writers they are translating. Therefore, they don’t really ‘unleash’ the material. I think we should have more writers writing less and translating more, while translators should also make attempts at writing their own literature, just to see what it feels like”.

Is there any less translated Polish author you’d recommend to international readers?

“There is one poet that I keep going back to: Zuzanna Ginczanka. You can download two free ebooks of her poems in my English translation here and here. She’s incredible, yet continually ignored by the Polish literary community. That is changing, because there are several musical shows and books and films about her life in development today. Ginczanka herself was a foreigner in Poland, having been born in pre-Revolutionary Russia. However, being a woman in Poland can be punishing, and women – even in the supposed enlightened artistic community – are often treated worse than men. Until Central and Eastern Europe grows out of its argumentative, retrospective tendencies – and welcomes in more visitors and voices from beyond its own borders – it will not evolve; and foreigners coming here is very much part of that cathartic process”.